Real Life: Your Awareness Trumps Your Beliefs and Your Conclusions 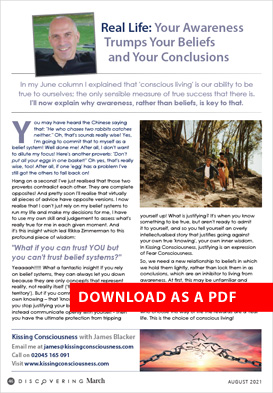 In my June column I explained that ‘conscious living’ is our ability to be true to ourselves; the only sensible measure of true success that there is. I’ll now explain why awareness, rather than  beliefs, is key to that.

You may have heard the Chinese saying that: “He who chases two rabbits catches neither.” Oh, that’s sounds really wise! Yes, I’m going to commit that to myself as a belief system! Well done me!  After all, I don’t want to dilute my focus! Here’s another proverb: “Don’t put all your eggs in one basket!” Oh yes, that’s really wise, too! After all, if one ‘egg’ has a problem I’ve still got the others to  fall back on!

Hang on a second! I’ve just realised that those two proverbs contradict each other. They are complete opposites! And pretty soon I’ll realise that virtually all pieces of advice have opposite versions.  I now realise that I can’t just rely on my belief systems to run my life and make my decisions for me, I have to use my own skill and judgement to assess what’s really true for me in each given moment. And it’s this insight which led Rikka Zimmerman to this profound piece of wisdom:

“What if you can trust YOU but you can’t trust belief systems?” 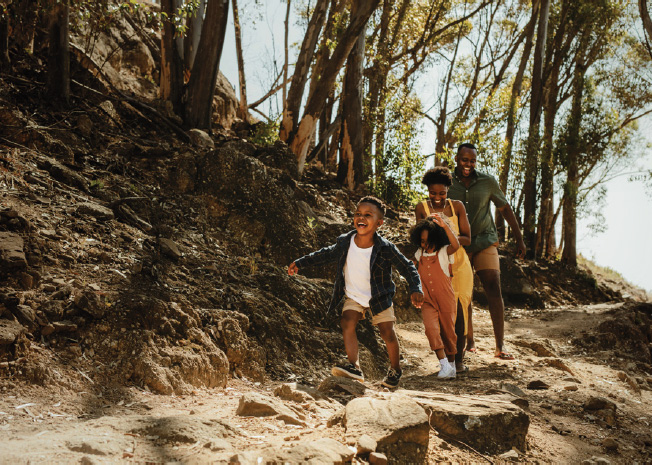 Yeaaaah!!!!! What a fantastic insight! If you rely on belief systems, they can always let you down because they are only concepts that represent reality, not reality itself (‘the map is not the territory’). But if you commit to always trusting your own knowing – that ‘knowing’ that you have when you stop justifying your beliefs and conclusions, and instead communicate openly with  yourself – then you have the ultimate protection from tripping yourself up! What is justifying? It’s when you know something to be true, but aren’t ready to admit it to yourself, and so you tell  yourself an overly intellectualised story that justifies going against your own true ‘knowing’, your own inner wisdom. In Kissing Consciousness, justifying is an expression of Fear Consciousness.

So, we need a new relationship to beliefs in which we hold them lightly, rather than lock them in as conclusions, which are an inhibitor to living from awareness. At first, this may be unfamiliar and uncomfortable, but with practice we can nurture and develop our natural ability to make decisions for ourselves and strengthen that capacity. There is no crutch this way, nothing to rely on, but for those who choose this way of life the rewards are a ‘real’ life. This is the choice of conscious living!

Our Articles in Discovering Magazine