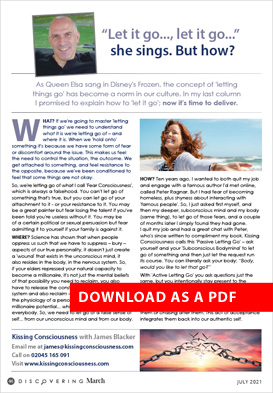 As Queen Elsa sang in Disney’s Frozen, the concept of ‘letting things go’ has become a norm in our culture. In my last column I promised to explain how to ‘let it go’; now it’s time to deliver.

WHAT? If we’re going to master ‘letting things go’ we need to understand what it is we’re letting go of – and where it is. When we ‘hold onto’ something it’s because we have some form of fear or discomfort around the issue. This makes us feel the need to control the situation, the outcome. We get attached to something, and feel resistance to the opposite, because we’ve been conditioned to feel that some things are not okay.

So, we’re letting go of what I call ‘Fear Consciousness’, which is always a falsehood. You can’t let go of something that’s true, but you can let go of your attachment to it – or your resistance to it. You may be a great painter but fear losing the talent if you’ve been told you’re useless without it. You may be of a certain political or sexual persuasion but fear admitting it to yourself if your family is  against it.

WHERE? Science has shown that when people oppress us such that we have to suppress – bury – aspects of our true personality, it doesn’t just create a ‘wound’ that exists in the unconscious  mind, it also resides in the body, in the nervous system. So, if your elders repressed your natural capacity to become a millionaire, it’s not just the mental beliefs of that possibility you need to reclaim, you also have to release the constriction from your nervous system and also reclaim – step back into – the body, the physiology of a person willing to receive their millionaire potential…  which is actually pretty much everybody. So, we need to let go of a false sense of self… from our unconscious mind and from our body.

HOW? Ten years ago, I wanted to both quit my job and engage with a famous author I’d met online, called Peter Ragnar. But I had fear of becoming homeless, plus shyness about interacting with ‘famous people’. So, I just asked first myself, and then my deeper, subconscious mind and my body (same thing), to let go of those fears, and a couple of months later I simply found they had gone. I quit my job and had a great chat with Peter, who’s since written to compliment my book. Kissing Consciousness calls this ‘Passive Letting Go’ – ask yourself and your ‘Subconscious Bodymind’ to let go of something and then just let the request run its course. You can literally ask your body; “Body, would you like to let that go?” With ‘Active Letting Go’ you ask questions just the same, but you intentionally stay present to the mental, emotional and physiological resistance that typically arises as a result of challenging that historical oppression. Staying present means we allow the  feelings to arise without either avoiding them or chasing after them. This act of acceptance integrates them back into our authentic self.

Our Articles in Discovering Magazine